How to install node.js on your Linux ubuntu? 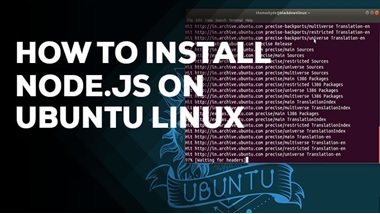 It is a platform that works with strong JavaScript modules to create and support applications. Netflix, Walmart, and other well-known companies.

And Similarly, some other emerging technology platforms are using this technology because Node.js uses the extremely powerful JavaScript V8 engine on the Chrome browser.

Node.js widely uses by many developers from all corners of the world because it is free to use.

And its open-source availability has attracted people’s attention.

Similarly, Its server-side modules make it easy to use and install on every operating system, including Linux ubuntu.

How to install node.js on Linux Ubuntu?

In this article, we will show you how to install node.js on Linux Ubuntu.

There are three methods of installing node.js on your Linux ubuntu.

Linux ubuntu has node.js installed by default in its repository that can use for various purposes.

At first Linux, ubuntu contains a 10.19 version of node.js in its default repositories which is not the latest version but can use for early programming practices.

Then you can install node.js using this command:

After installation complete you can use node to verify:

This will tell you that you have successfully installed node.js in Linux Ubuntu.

To use this method to install node.js in your Linux Ubuntu, first, you have to install PPA to get its packages.

The home directory allows you to use the curl command to install the required version or replace the current version with 14.x of PPA.

You can use the nano command to check the downloaded script status:

Close the editor after checking the script and run this program using the Sudo command:

After running the Sudo command, However, PPA will be successfully installed on your Linux Ubuntu and Similarly unlocking its packages for your use.

Then, you can use it to further install node.js by following the same method given above.

You can use –v with node command to check the version of node.js installed on your Linux ubuntu.

However, This output will show you that you have successfully install node.js to your Linux Ubuntu using PPA.

You can also download node.js using node version manager which will allow you to work with different independent versions of node.js on your Linux ubuntu.

First, visit the main page of the project’s GitHub page and open the README file and copy the curl command.

From this, you can download the latest version of all.

Remove the bash command to alter the copied curl script to make it safe.

After checking it for safety, add |bash at the end of the script and run again, and nvm will install.

After this you can ask for the version of nvm, or directly install the desired version of node.js by typing this command:

However, After running this command your nvm version 13.6.0 will successfully install in your Linux ubuntu.